The Cheechoo gold project is located in the Eeyou Istchee James Bay region of Quebec, less than 15 km from Newmont’s Éléonore gold mine. The latest resource estimation update conducted on the property (Oct. 2020) has resulted in inferred resources containing 2.0 million ounces of gold (Moz), from 93.0 million tonnes (Mt) at an average grade of 0.65 grams of gold per tonne (g/t Au), with a significant upside for expanding these resources. 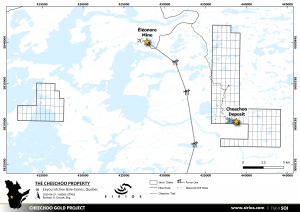 The Cheechoo gold project is located in the Eeyou Istchee James Bay region of Quebec, less than 15 km from Newmont’s Éléonore gold mine, which began its production in 2015.

The property consists of a main block of 121 claims as well as a secondary block of 35 claims located about 20 km to the west. These 156 claims totaling 81 km2, are fully owned by Sirios (with a royalty to Golden Valley Mines Ltd. ranging from 2.5% to 4% based on gold price on 145 claims).

The Cheechoo project is located approximately 800 km north of Montreal and 200 km east of the Wemindji Cree community. 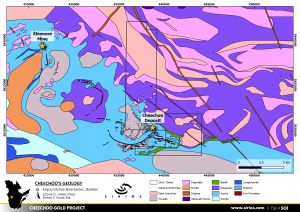 Regional Geology of the Cheechoo Project.

The property straddles the suture zone between the Opinaca meta-sedimentary subprovince and the La Grande volcano-plutonic province. It is composed of both granitoids typical of the La Grande sub-province and metatexites typical of the Opinaca sub-province. The geology of the property consists of tonalite, meta-wacke, paragneiss, granite and pegmatite.

The gold mineralization is primarily hosted in a silicified and albite rich tonalite, with the presence of parallel or stockwork-type centimetric quartz veins or veinlets. It includes a very low sulfide content (<1%, pyrrhotite-arsenopyrite-pyrite) along with variable amounts of amphibole, biotite, chlorite, diopside, tourmaline and scheelite. Most of the gold occurs as free coarse grains. These overall characteristics are typical of Reduced Intrusion Related Gold Systems.

For more information, please consult the scientific article published by the Geological Survey of Canada in 2018 on the Cheechoo property.

The latest resource estimation update conducted on the property (Dec. 2022), based on an open-pit constrained model, resulted in:

This data comes from the resource estimate update (BBA Inc.) which results have been published in the December 6, 2022 press release.

As of April 2020, the exploration work conducted on Cheechoo amounts to 68,000 m of drilling (295 holes) and 3,200 m of channel sampling. (For more details, please consult the press release list announcing the drilling results.)

The main gold area (approximately 500 by 500 m) has been drilled with a 50 m spacing. In order to collect structural data, downhole logging surveys were completed on 57 drill holes. 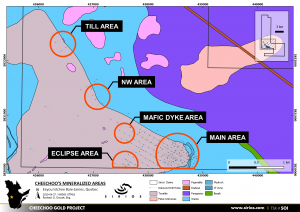 The work undertaken to date demonstrates the extent of the Cheechoo mineralized system. The mineralization spreads for more than 1,400 m along the tonalite/meta-sediments contact. (ref. February 8, 2018 press release) and up to 500 m towards the interior of the intrusion. Gold mineralization has also been tested down to 650 m below the surface.

Furthermore, the exploration work carried out to the west of the main area indicates that the mineralized envelope could extend to the west towards the area called Eclipse.

High-grade gold intervals are frequently intersected within the low-grade envelope. As of January 2020, a total of 37 high-grade zones have been defined and modelled, including the Jordi Zone, which is distinguishable by the presence of gold bearing pegmatite and quartz-feldspar veins with visible gold. This zone, which is 5 to 10 m thick, is continuous for more than 300 m laterally and for nearly 200 m downdip, while remaining open at depth. About 50 drill holes have intersected it, with grades up to 56.4 g/t Au over 8.2 m.

The Eclipse area is located at more than 750 m west of the main area and represents the continuity of the Moni showing (from the neighboring Éléonore South property). This area’s mineralization is characterized by near-surface, very high-grade gold veins, which are hosted in a low-grade tonalite.

Till Area. 3 km north-west of the main area, gold anomalies have been detected in till samples. In this area, drill hole #73 intersected anomalous gold grades, including 0.8 g/t Au over 5.4 m.

Metallurgical tests conducted in 2019 on samples representative of Cheechoo’s mineralization obtained gold recovery rates up to 97%, including 88% by gravimetric process.

The tests also demonstrated potential to concentrate the sulfides in the gravity process tailings using flotation. Note that the tailings from the treatment of Cheechoo samples have a very low sulfides content, in the order of less than 0.2%. Cyanidation tests also show a low consumption of reagents (<0.6 kg/t of NaCN and <1.1 kg/t of Ca(OH)2).

The Cheechoo project has numerous positive characteristics, including:

Discovering gold from prospecting to advanced exploration.
Sirios generates and manages its mining exploration projects by working closely with its partners, fully respecting communities and the environment, as well as utilizing the latest advanced technologies.